The fountain “Le Griffoul” located in Place St Etienne has its own little peculiarity. Did you know that originally the water of this fountain flowed through 4 Manneken-Pis. Outraged by this lack of decency (we don’t remind you where the water from the Manneken-Pis comes from), people asked that they be replaced by 4 cherubs, from where now the water flows through the arm.

The black plague? Pfff little player facing the fury of the god Apollo! Indeed, at the time of the Romans, Gallic soldiers, inhabitants of the current Toulouse region, shamelessly plundered the temple of Apollo in Delphi (Greece). On their return home, they each in turn succumbed to an epidemic. Sickness? No, a simple manifestation of divine wrath! Considered cursed, and in order to protect the locals, the booty was buried in a nearby lake. A lake which, according to legend, is nowadays under the church of St. Sernin.

It is explained immediately, it is the association of the Greek: ζϋθος, zûthos, meaning “beer”, and φίλος, phílos, meaning “person who loves”. And what could be better than to make history by remaining in the annals as the king of beer. This is what Gambrinus, the mythical king of Flanders and Brabant, did. Legend has it that he sold his soul to the devil to obtain the secret of brewing beer. It is at “10 rue du Pont de Tunis” in Toulouse, in a building that once housed a brewery, that you can discover under a balcony his bust holding a glass in his hand, a beautiful tribute to this king.

This quote was delivered by Pierre-Georges Latécoère, founder of l’Aéropostale. This company which will count among its pilots Jean Mermoz or Antoine de St-Exupéry. They will be staying at the Grand Balcony Hotel on their days off, in rooms 32 and 20, not far from Place du Capitole. 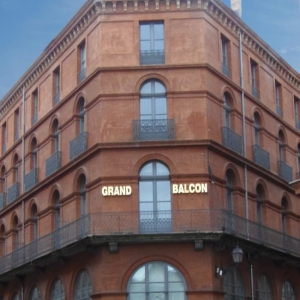 While they are generally reserved for aerospace use, you will find at number 59, rue Alsace Lorraine, one of the only two clocks in France with a 24-hour dial.
Yes, you read correctly, 24 hours instead of the usual 12 hours. Also, in one day the hand does not pass twice in the same place.

If Toulouse is known for the funny names of its streets, you will find in the pink city, also the rue du Maréchal Clabel. But what did this illustrious stranger do you ask yourself to deserve the honour of having a street in his effigy? Well, the answer is nothing at all. Indeed, this officer never even existed! “Mal Clabel” in Occitan means “badly paved”, except that the distracted workman, when the street name was inscribed, turned him into Marshal Clabel!

Did you know that a house is said to be haunted in the Paul-Feuga alleys? The neo-gothic-style house was built by the painter Henri Rachou, whose paintings decorate the Hall of Illustrious of the Capitol. It is presumed that he murdered one of his models, who is still haunting the place. Since then, generations of inhabitants of Toulouse have kept this story alive, ensuring that at nightfall, one can see strange gleams in the windows and hear strange noises from the house?

Following the siege of Paris (in 1870), many aqueducts were destroyed and the already high price of water was considerably increased. As a result, many poor people were unable to find free water. Sir Wallace, then filed a request to build fountains to remedy the situation. Even today, these water points are still available and always free for people like the homeless. Rich or poor, everyone can drink from them. Concerning the aesthetics of the fountains, the fountain of the Place St Georges in Toulouse is composed of 4 caryatids representing simplicity, sobriety, kindness and charity.

You must have noticed that on many gates of the pink city there is a point, on the right at the bottom. Occitan aesthetics? Not at all! This comes from the fact that the engravers of the time were often illiterate, so the point was a landmark for them to hang them in the right direction.

We hope you have discovered many new fun facts! And if you want to take a tour of the city to see these places with your own eyes, then visit our partner Citytour Toulouse!